"The Weinstein Company is taking on the ratings board over “3 Generations.” 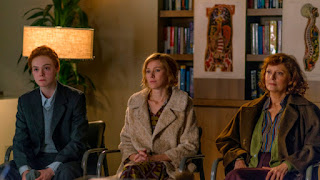 The drama about a transgender teenager earned an R-rating from the Motion Picture Association of America (MPAA) for profanity and for sexual references. That means that moviegoers under the age of 17 can’t buy a ticket without a parent or guardian. The Weinstein Company is objecting, arguing that the film needs to be seen by high schoolers because it has a message of acceptance and inclusion that’s relevant at a time when transgender rights are being hotly debated. Transgender teens also have a higher suicide rates — 40% of transgender adults attempted to kill themselves, with 92% of those attempts coming before the age of 25."
“3 Generations” follows Ray (Elle Fanning), a teenager who has struggled with the body assigned to him at birth and is determined to start transitioning. First, however, he must find his biological father in order to get permission for the medical procedure."
Naomi Watts, who stars in the film as Ray’s mother Maggie, said: “This film is a beautiful and touching story about family and identity. It is important for teenagers to see it and the ‘R’ rating doesn’t reflect today’s society. ‘3 Generations’ doesn’t have a bad bone in its body, it’s an expression of love, acceptance, strength, and honesty — values that could not be more necessary right now.”
"In a separate statement, Susan Sarandon, who stars in the film as Ray’s grandmother commented, “‘3 Generations’ is an important movie for everyone to see, especially transgender youth who are feeling isolated or fearful and their families. It’s ridiculous to have an R rating which would prevent this audience from seeing the film.”
at April 07, 2017