Don't Get Your Panties in a Bunch!

As I wrote about earlier this week, I went to my second cross dresser/transgender meeting this month. Unfortunately it was less well attended than the last one and the "snarky" cross dresser's wife wasn't there (either was he) as I suspected they wouldn't be.  In their place came a very smug real live 45 supporter post opt, another very new cross dresser to the scene and even another transgender veteran. 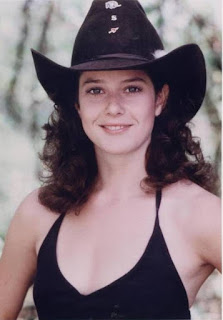 As the evening unfolded, the conversation degraded into a couple of the participants going into detail on how they had had to "beat down" detractors in the past. Look, I know most of us have had our share of transphobic slurs over the years, but going into gleeful details of physical responses isn't my idea of any kind of femininity. Especially in front of a new cross dresser who isn't "used" to the culture seen for the first time. It was almost as bad as when I went to my first transvestite mixer back in the day and some of the "girls" couldn't put their cowboy hats and big cigars away. And this was way before "Urban Cowboy". See Debra Winger!  Who could really rock the hat.

One was the Navy trans vet who I had seen at a clinic before and wondered why she seemingly put so little into her appearance, walk, etc. I used her as a motivation to keep trying harder to make the most that I can from my appearance. And, I can't be too cocky because for years I have been able to surround myself with other women who treat me as an equal. Which keeps the public in check for the most part.


So, for the second straight meeting, I sort of kept my feelings to myself and simply said my overwhelming public response to being transgender and even my early days as a cross dresser was positive. Or, I chose it to be. Sure I got the snickers (not the candy bar) on occasion, but I simply kept moving.

Plus I will admit to the rest room incidents I encountered along the way which still give me PTSD when I have to pee. None of which have soured me or deterred me from loving the life I am leading now.

It just saddens me to see others- be them cross dressers or transgender women be so negative and aggressive. Maybe those on HRT need a little higher dosage of Estrogen?