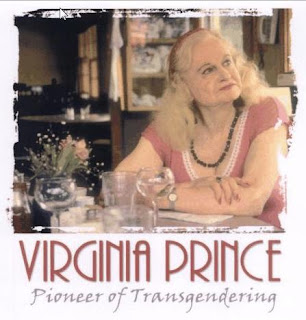 For me these were the days shortly after Virginia Prince and her Transvestia publication burst upon the scene. I was still amazed others in the world felt the same way I did. So, I ordered several issues of Transvestia and discovered a group of hetero sexual transvestites who held mixers through out the country. The closest to me was a very drive able Cleveland, Ohio so I paid my dues and headed to my first of several mixers.

From those mixers I learned several important lessons including a much closer chapter forming in much closer Columbus, Ohio.
Other lessons learned were some there were hetero questioning or as I called them "admirers in drag" cross dressers, and even a few who were on their way to perhaps a stealth (SRS) transsexual full time existence as a woman.
What Virginia never wrote about though was the difference internally was between a male who could pass as a female and one who had a feminine soul. So I know Virginia and others considered her a transgender pioneer but I am one of those who is not so sure.
I also discovered a very distinct social system as distinct as the one high school girls had. Very quickly I called them the "A" listers  because of their "mean girl" style social clique. You definitely had to look a certain way to be invited into the group. Which of course I didn't. However, these also were the ones who left the motel/hotel to go party elsewhere later in the evening. Later on I would attach the "trans-nazi" label to them but still tagged along-invited or not.
Other notable exceptions to the norm were the guys in their fancy dresses and smoking cigars as if to not let too much of their male self go.
Two dimes were dropped on me during these mixers in Cleveland. One, was an invite to join the group in Columbus and the other thanks to a free makeover at a mixer.
I pulled up my big girl panties and let a makeup artist take all my war paint off and start over. The results were startling. I was even invited to go along with the "A" listers without having to invite myself. Most importantly though as the night was beginning to wind down (right in front of all of them, a guy who seemed real nice invited me to stay over for a drink. I often wondered what would have happened had I said yes?
As promised though, I discovered an even smaller incredibly diverse group to learn from in Columbus as time marched ever forward.
Coming up next, German Village.
at January 16, 2017