Two out of Three is Great! 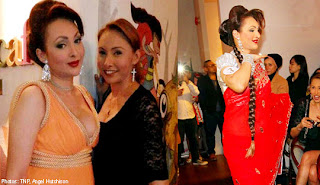 "She (mother) was torn when two of her three sons decided they wanted to become women. It was a double whammy Madam Monica soon grew to accept. Her sons, dressed as girls, took part in transvestite beauty pageants and made waves. They then went for sex change operations. On Friday night, more than a decade after they first told their mother about their sexual inclinations, one of them emerged a beauty queen again – at the age of 38. Ms Angel Aurora Jalleh-Hosey beat 12 other finalists to be declared Miss Exotica 2012, a competition for transgenders in Singapore and around the region at Talent Cafe in Tanjong Pagar. The title is apt. Ms Angel was formerly a Mister and so was her sister, Ms Jessie Jalleh-Hosey, 37. The sisters dropped their original surname of Hutchison for Jalleh-Hosey, an amalgamation of their parents’ last names. Ms Angel’s latest win was her second attempt at a beauty title this year. Her sister, who was in the audience dressed in a tight black lace dress, is also a former beauty queen."