It's still Pride Month even though most all events around the Cincinnati Metro area have been postponed. As a matter of fact, the main LGBTQ Pride event here has been rescheduled for October.
This morning I saw an commercial on television for some sort of a water proof make up product. Then I remembered I thought I had a picture from a Pride "Pub Crawl" Liz and I went on several years ago. Of course, right in the middle of it, a rain began to fall. My motto is you can only get wet once, so we bravely moved into the next stop on the crawl schedule.
Ironically, once my hair began to dry out it more than regained it's normal volume and waves. As the evening concluded, we were able to celebrate Pride in style, if not a dry one! 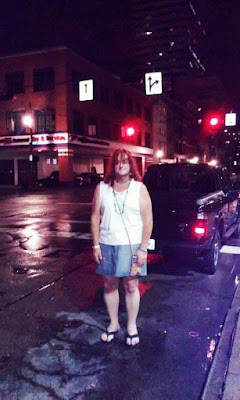 It is a Pride I will remember because it was the night I slipped on a curb and re-micro broke my ankle.Hopefully this October at Pride I will be more careful!
Email Post