With all the ultra important happenings going on in the world right now surrounding BLM and Juneteenth, it's increasingly difficult for me to find things to write about. It is just too easy to say I am a privileged white person who grew up in a predominantly rural white school  without even the benefit of history books which conveniently left out most of the black history all together. Tragically, the only racial knowledge I heard came from my Grandma who passed on stories about going to KKK meetings in my hometown in Southern Ohio. Juneteenth, or anything similar had no place in my house. In fact, the only dealings I had with a POC was with one family which went to my small school. This was back in the 50's and early 1960's when things were about to change...somewhat.
Today, I feel guilty when I see all the peaceful demonstrations I can't take part in due to my physical problems walking. I am still too vain to attempt it in a wheelchair.  On the other hand I still have this blog to sound off on my feelings. My fondest hope is the younger generation can be counted on to finally put an end to the systematic racism going on in this country today.
This also extends to the continuing rash of transgender women (mostly of color) being killed. Just recently, a young transgender woman was involved in a robbery and killed here in the Cincinnati, Ohio metro area.
Any way you look at it, we have a terrific amount of ground to cover in our country when it comes to race relations. In November maybe we can really jump start the process going on now in the streets.
Finally, a thought about privilege to leave you with: 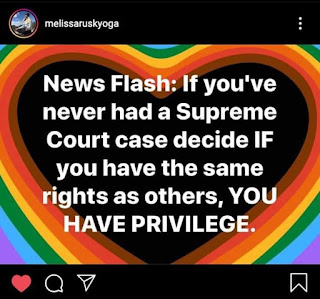