In another twist to the gender spectrum, Sean Hayes of Will and Grace fame is playing a woman. Not a drag act but playing a woman called "Lazy Susan"  In fact, this month Hayes will star in the film he co-wrote as the title character. The character (Susan) is a middle aged woman stuck in a teenage mentality. She constantly mooches money from her family. She shops at K-Mart and lives on blended ice cream drinks. Susan's life suddenly changes and she finds a renewed purpose when she meets a new handsome man.  The plot evolves further when her mother cuts off her fiances and Susan has to find a way to survive adulthood on her own.
The true gender twist to this movie comes from the fact Hayes never plays Susan as a man impersonating a woman such as what happened in Tootsie. Unfortunately, don't look for the movie soon in an independent theater near you. If everything comes back to normal soon, the production will premier on Broadway next winter and be released as a film next summer. 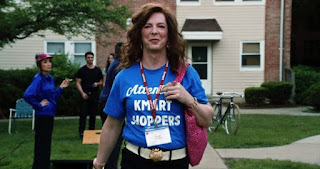