For all Americans, once again it's time for a presidential election.
Along the way, I have decided to stay sort of non political here in Cyrsti's Condo which is tough since I am a very political person.
With great interest, I have watched how this election is laying out.
I'm pretty jaded and don't think either political party is really interested in helping the average citizen much. If government just stayed out of the way, we would be a stronger country.

BUT
I can't help but think this year's Republican ticket has the real potential to set back our transgender rights for years. Specifically I just know (that somewhere down the line) a huge check was written in Chick Fil-A's name when the Republican VP candidate was announced.
So I know my vote isn't going to the chicken chain and their party.

Typically, there are many sub plots involved with any election. Here is an important one from a transgender vet publication Outserve.


The Williams Institute at the UCLA School of Law estimates that 25,000 transgender people could lose the right to vote due to voter ID laws. Many conservative states make obtaining a driver’s license with a trans person’s correct gender nearly impossible, or prohibitively expensive. As a result, up to 41 percent of trans people lack a correct driver’s license. While the map in the link above shows that this disenfranchisement is unlikely to affect the general election, or even statewide elections, it denies people the democratic voice we have fought for over the course of 226 years. Republicans don’t seem interested in trans people voting. When margins in elections get too narrow, though, democrats seem to prefer for military absentee ballots not be counted either. In closely contested Presidential races, the pattern has been for the democratic candidate to contest military absentee ballots (Bush v Gore), and for the republican to contest provisional ballots (Bush v Kerry). Voters with name discrepancies, like the transgender community, are typically forced to use provisional ballots. The math on why these two patterns happen is pretty simple; military people generally vote conservatively, and LGBT typically people vote for the more liberal candidate. There is an upside, I suppose. If the ban on trans people in the military ever ends, at least it will finally give both parties something they can agree on. They will finally have a demographic neither group wants voting. 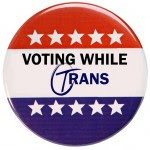